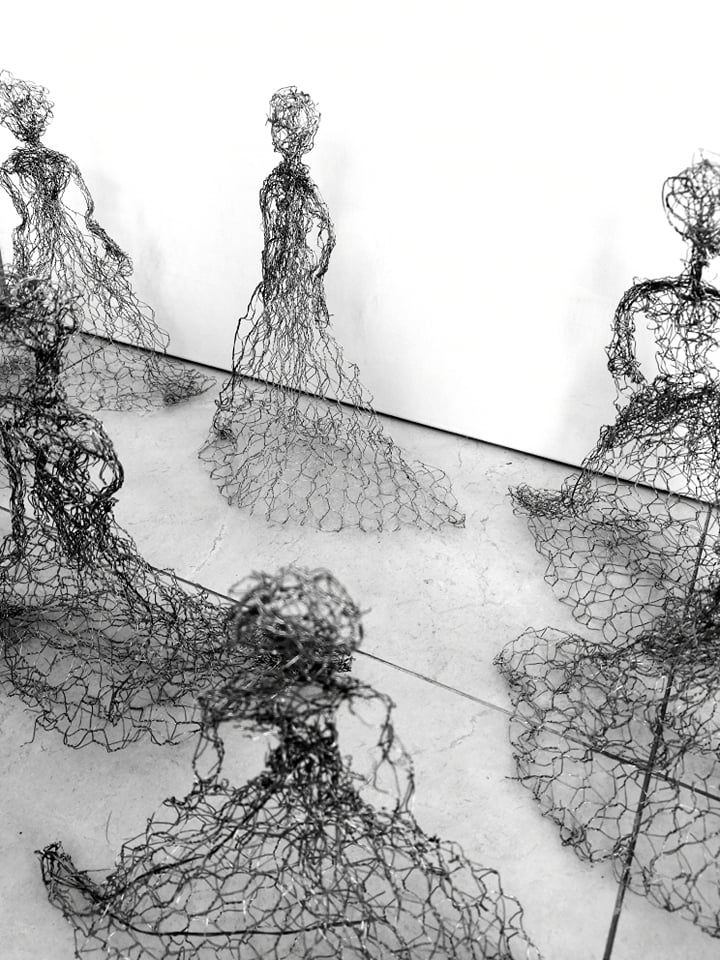 Last night, 02/12/2019, the cohort presented their current practices. I presented mine too. You can view it beneath.

The feedback I got was constructive. Comments included the following:

My thoughts unwinding as I hear the comments:

As I was lying in bed last night, I kept thinking about what is the common ground between the 3 different entities that now make up Clara – the collaborators, Clara as physical being and the maker. In “Materiality”, (part of the WhiteChapel anthology), Wolfgang Kemp states that “form is everything and material nothing” where “form follows function” and that “material…took on the role of an interpretative authority”. From the start, I have interpreted Clara to be feminine, and therefore her form resembles a female one. The more Claras I made, the more emphasis I placed on her skirt – making the bottom part of the sculpture more broad and more “flowy”. Even though, at the time, I was aware I was doing this with the skirts, it didn’t really occur to me why I was doing it.

The collaborators are female, the form is female and the maker is female. Femininity is the common core, the generic aspect, of this project that I must focus on. “Skirt” being the operative word, I looked up its meaning or ways of interpretation found at https://www.lexico.com/en/definition/skirt :

Definition of skirt in English:

1 A woman’s outer garment fastened around the waist and hanging down around the legs.

1.1The part of a coat or dress that hangs below the waist.

2 informal mass noun Women regarded as objects of sexual desire.‘so, Sandro, off to chase some skirt?’

3 A surface that conceals or protects the wheels or underside of a vehicle or aircraft.

4 mass noun An animal’s diaphragm and other membranes as food.‘bits of beef skirt’

4.1 British count noun A cut of meat from the lower flank.

5A small flap on a saddle, covering the bar from which the stirrup leather hangs.‘I pulled myself slowly into the saddle, arranging the skirts carefully.’‘If the saddle or the blanket is too long at the skirt it too may be rubbing her at the hip bone area.’

It seems that Clara’s skirt can be leading me somewhere. I have to think what will I do with the skirt – do I make a skirt, do I weave her existing skirt? What materials will I be using to convey one focal point? How will I be using those materials?

I did some research this morning on skirts in art and these are some of the artists that I came up with:

I feel that the skirt and it’s essence is vital to work on. It can follow many directions and unravel as I go along.

I feel a make is due.